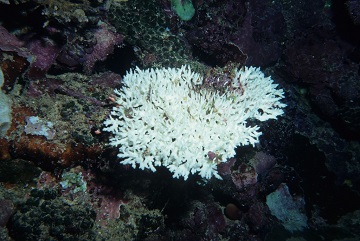 Some corals may be able to adapt to warmer temperatures, rather than bleaching and often dying. Credit: by Derek Keats, CC BY 2.0

Warming oceans have damaged or destroyed many coral reefs. But some appear to be adapting to the warm-up. Reef systems in a part of the central Pacific Ocean, for example, have suffered less damage from a couple of recent underwater heatwaves than from an earlier one. That could mean that coral offspring that are more resistant to heat are taking hold.

Corals die when it gets hot because they expel the algae that give corals their color. The algae are a major source of energy for corals. So when the algae are gone, the corals don’t just lose their color -- they’re much more likely to die.

Researchers studied corals in the Phoenix Islands Protected Area -- a region that covers about 150,000 square miles far to the north of New Zealand. The researchers analyzed almost two decades of observations of coral beds and ocean temperatures at four sites within the protected area.

During a major ocean heatwave in 2002 and 2003, the sites lost about three-quarters of their corals. The reefs mostly recovered. Following a similar heatwave a few years later, the reefs actually increased. Then, during a much bigger heatwave in 2015 and ’16, about 40 percent of the corals died off -- a lot less than expected.

Scientists who conducted the study say that could mean that the offspring of the survivors are more resistant to heat than earlier generations. As they populate the reefs, these new generations might be better able to withstand warmer temperatures in the years ahead.