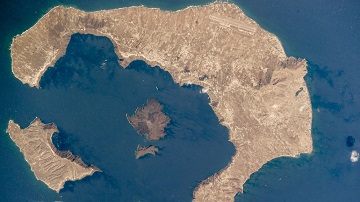 Sea level seems to influence eruptions from the partially-submerged volcano of Santorini in Greece. Credit: NASA

A volcano responsible for one of the most powerful eruptions of the last 10,000 years may be settling in for a nap—the result of higher sea levels.

Santorini Volcano is in the Aegean Sea, southeast of mainland Greece. About 3600 years ago, it staged a spectacular eruption. It may have blown 15 cubic miles of rock and gas into the air. The eruption has been blamed for the demise of the nearby Minoan culture. And that could have triggered the legend of the lost city of Atlantis.

Researchers combed through records of 360,000 years of eruptions. They used marine sediments mixed with the volcanic rock and ash to gauge sea level. They found that when it was at least 125 feet below the current level, the volcano started acting up. And as the sea level dropped even lower, Santorini got even more active.

Water atop the volcano may act like the lid on a pressure cooker, keeping Santorini from boiling over. As the water level drops, though, the pressure inside the volcano takes over. The walls start to crack, and molten rock from a chamber deep below the surface forces its way upward. When the water pressure is low enough, the volcano erupts, pumping out ash and gas, then lava.

As sea level rises, though, the process is reversed. The cracks begin to seal, and the eruptions come to a halt.

The researchers found that of 211 big eruptions, all but three took place when sea level was much lower. And with sea level on the rise, that suggests Santorini could be ready for a nap.