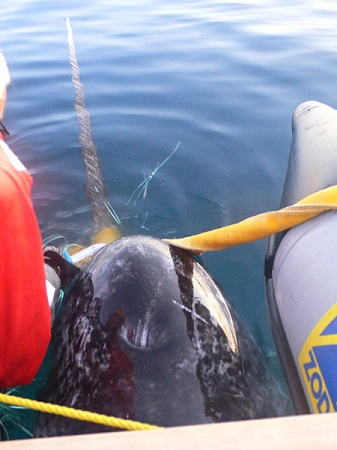 The tusk of a narwhal has a lot of uses. It may help the whale attract a mate, sense prey, and stun its prey. It inspired folktales of unicorns. And today, it’s helping scientists examine changes in the environment.

A narwhal tusk can reach up to 9 or 10 feet in length. It’s actually a tooth that grows from the upper jaw of a male. It forms a new layer every year. And like the rings of a tree, each layer records a little about the year, including the narwhal’s diet and its exposure to pollution.

Narwhal spend most of their time in the Arctic, including months under the ice. But as the ice has thinned out, things have changed.

Researchers logged those changes in a recent study of 10 tusks. They were collected by native populations in Greenland during their traditional hunts. The layers in the tusks recorded the years 1962 through 2010.

During the early decades of that period, the narwhal fed mainly on fish that live under the ice. After about 1990, though, they consumed more species found away from the ice -- an indication that the whales were spending less time under the ice.

The study also showed that the levels of mercury in the narwhals had jumped in recent years. Mercury causes problems with the nervous system and reproduction. The narwhal doesn’t have a way to get rid of it, so it builds up.

The mercury may come from coal-fired power plants. Whatever its source, though, it could make life tougher for the whales with the versatile tusks.