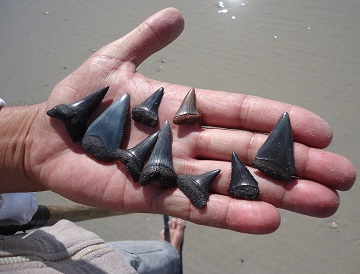 It’s a case fit for Sherlock Holmes: the case of the disappearing sharks. Almost 20 million years ago, about 90 percent of all sharks, and 70 percent of shark species, disappeared from the open ocean.

Scientists reached that conclusion by studying sediments from two locations in the Pacific Ocean. One was in the north Pacific and the other in the south.

The sediments were in core samples -- long tubes pushed into the sea floor. The tubes filled with sediments from up to 50 feet below the sea floor. Scientists used various techniques to date the different layers in the cores.

For the shark study, they looked at tiny fossilized scales. They found plenty of shark scales in the older layers. But in layers younger than about 19 million years, the scales almost vanished -- an indication that the sharks themselves had disappeared.

The researchers don’t know what caused the sharks to go away -- especially since there’s no record of other animals disappearing then. There are no indications of a major climate-altering event, such as an impact by a giant space rock like the one that killed the dinosaurs 66 million years ago. That simply adds to the mystery of the vanishing sharks.

The numbers of sharks and shark species didn’t start to rebound until several million years after the extinction event. But the creatures never made it back to the numbers they had before. So there may be far fewer sharks in the oceans today thanks to a mysterious event almost 20 million years ago.