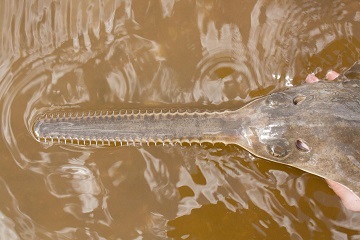 Southern Florida has been seeing more of a fish that had just about vanished from its coastline. Most of the rest of the world, though, has been seeing less of it. And without some urgent action, before too long they might not see it at all.

The sawfish is one of the most distinctive creatures in the oceans. It’s a type of ray. It has a long, flat snout -- called a rostrum -- that’s lined with “teeth” that jut out to the sides. The rostrum and head are coated with sensors that detect the motion of prey. Once it finds a potential meal, the sawfish slaps the prey with the rostrum to stun it.

There are five species of sawfish. They’re found mainly in warmer waters in several parts of the world. But they’re vanishing. One study found that they’ve disappeared from 55 of the 90 countries where they were seen just a few decades ago. And according to some estimates, the population has been slashed by 95 percent. A study warned that without immediate action, the sawfish could disappear completely in a few decades.

In the U.S., sawfish were common from Texas to the Carolinas. Today, though, they’re seen almost exclusively around Florida. They were done in by overfishing, accidental snagging in nets, and loss of habitat.

But the U.S. put sawfish on the endangered species list a couple of decades ago. Conservation efforts appear to be helping the lone species still seen in American waters to rebuild -- leading to more sightings on the Florida coast.