Valley of the Whales 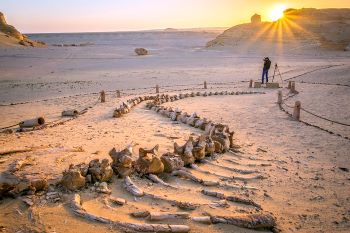 An ancestor of present-day whales was discovered in Wadi al-Hitan, the Valley of the Whales. Credi: Ahmen Mosaad, CC BY-SA 4.0.

Phiomicetus anubis would make a great subject for a science-fiction movie. Named for Egypt’s jackal-headed god of death, it was about 10 feet long, weighed about 1300 pounds, and had long, powerful jaws full of sharp teeth.

More important for science, it could travel across land and through the sea. That’s because it was one of the earliest species of whales. It was making the transition from land to the oceans—more than 40 million years ago.

It’s one of several species of whales found in Wadi Al-Hitan—the Valley of Whales. It’s in the western desert of Egypt, less than a hundred miles southwest of Cairo. It contains one of the world’s most extensive collections of whale fossils.

The whales all belonged to a group known as Archaeoceti—among the earliest whales on the planet. They wouldn’t look familiar to modern-day whale watchers, though. All of them were evolving from land-based animals to water-based. Many of them had hind legs and toes, five “fingers” on their front flippers, and other features of land animals. So, these creatures are the “missing link” between the animals that preceded them and today’s marine giants.

Scientists have found the fossilized skeletons of hundreds of these early whales. The biggest was about 70 feet long. Most of the fossils have been well preserved in the desert. As a result, Wadi Al-Hitan has been designated as a World Heritage Site—a unique spot in the land of the pharaohs.