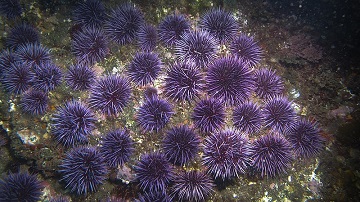 When sea urchin populations expand unchecked, they can eat all the kelp in an area, creating an urchin barren. Credit: Ed Bierman, CC BY 2.0

A heat wave a few years ago off California’s Monterey Peninsula presented sea otters with a smorgasbord: an eruption of one of their favorite foods, sea urchins. And the otters have taken advantage. But they don’t appear to like all the urchins. Instead, they pick the most choice ones. And that’s left a patchwork of kelp beds where there used to be a continuous forest.

Kelp used to cover many square miles of the sea bed in that region. In 2014, though, a marine heat wave killed off large amounts of the kelp. At the same time, a disease swept through the population of sea stars, which eat urchins.

With fewer predators, the urchin population expanded like crazy, and started gobbling the remaining kelp. That created big sections of sea floor with no kelp but huge numbers of urchins -- zones known as urchin barrens.

Researchers have studied the aftermath of that change. They’ve found that urchins in the barrens aren’t all that healthy. In fact, many of them are starving. Those in the patches that still have kelp are healthier. And those are the ones the sea otters prefer to eat.

As a result of all the changes, there are more sea otters in that region. They eat more urchins, and they tend to be healthier. And by keeping the urchin population under control in some patches, they’ve helped keep those kelp beds healthier, too.

Kelp in the barrens, though, are on their own -- they’re not getting any help to get rid of the urchin smorgasbord.