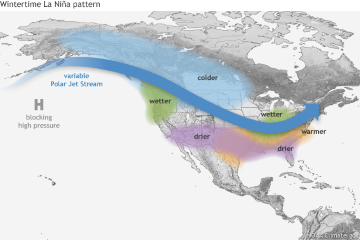 La Nina results in pronounced trade winds at the equator, which can cause dry climate in the southern U.S., leading to droughts and wildfires. Credit: Fiona Martin, NOAA.

Few things are worse than a guest who just won’t leave. And lately, that appears to be the case with La Niña—a period of cooling in the Pacific Ocean that brings nasty climate conditions to much of the United States. There are indications that La Niñas are becoming more common and staying longer. In fact, the winter of 2023 is bringing a “triple-dip” La Niña—only the third since scientists began tracking the phenomenon, in 1950.

La Niña is the opposite of its famous cousin, El Niño. It generally brings heat and drought to western and southern parts of the United States, strong monsoons to the southwest, more hurricanes, and more severe storms from Texas to Missouri. The effects tend to be worse in winter than other seasons.

Analysis of climate records suggest that La Niña is becoming more common. One report says that before 2000, it was around during the winter about a quarter of the time. Since then, however, it’s been visiting about half the time. That could be the result of climate change, normal cycles in the Pacific, a combination of the two, or something else.

The most recent La Niña developed in the summer of 2020, during a record-setting hurricane season. It weakened the following summer, but was back by fall. It reached a record intensity in April 2022, weakened slightly in summer, then roared back in the fall. If it persists into winter, as expected, it would be the first “three-peat” ever seen—extending the stay of this unwelcome guest.