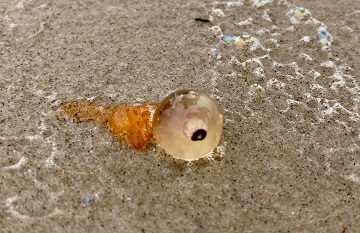 You never know what you might find on the beach. The variety of plants, animals, and objects just keeps growing. In part, that’s because of our changing climate. As the oceans get warmer, new critters turn up on beaches where they’ve never been seen before.

One recent newcomer was an odd creature that washed ashore on Mustang Island in Texas, near Corpus Christi. Beachgoers reported seeing several of them. They looked like a miniature version of something from an old sci-fi flick: the crawling eye.

Biologists identified them as a relative of the Portuguese man-o-war: Rhizophysa eysenhardti. Thanks to its appearance, it’s sometimes called a thread jelly or spaghetti monster.

It consists of a small round “bubble” with a dark spot at the top that makes it look like an eyeball. The bubble acts as a float that supports the “spaghetti” -- a long string below it. “Spikes” extend from the string.

The string is actually a colony of specialized cells. Some of them digest food, for example, while others provide a nasty sting -- to prey, predators, or unwary beachgoers. And some of the cells produce light, perhaps drawing in prey.

The creature is normally found in tropical waters in the Atlantic and Indian oceans. It’s also been reported in the Gulf of Mexico. But it hadn’t been seen on Texas beaches.

It’s possible that Rhizophysa eysenhardti is expanding its range. But we probably won’t know for a while if this newcomer will become a regular sight on the Texas coast.