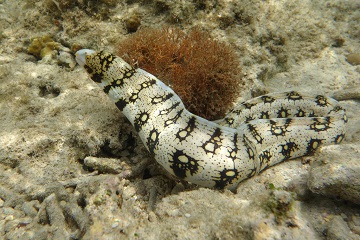 The snowflake moray eel has been known to slither onto the beach to catch a tasty crab. That’s not all that unusual -- several species of fish sometimes leave the water to eat. But the snowflake really leaves the water behind. Unlike other fish, it can swallow its prey without swallowing water to wash it down.

The snowflake is found in tropical waters across the Indian and Pacific oceans, from Africa to Mexico and Central America. It lives on reefs or rocky sea floors, where it can hide from predators. It’s typically about a foot and a half long, although it’s been known to top three feet. And it’s covered with white splotches that resemble snowflakes.

Like all moray eels, the snowflake has two sets of jaws. It uses the first to grab its prey. And it uses the second set to pull the prey in.

Researchers who’d heard stories about snowflakes coming ashore to eat decided to see how it might work. They studied eels in captivity over a period of six years -- seven individuals, for up to eight months at a time. In particular, they trained the snowflakes to come out of the water to eat. They then watched what happened.

They found that the eels not only grabbed the food that was left for them, but they swallowed it on land as well. They didn’t have reserves of water in their jaws to help swallow -- the prey was pulled in by the second set of jaws. The experiment showed that the eels can eat just fine without any water at all -- either for catching a meal or for washing it down.