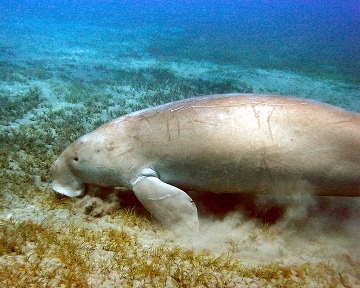 If you’re spending an afternoon on your favorite bay, you probably don’t want to see any sharks gliding through the water. But the bay itself just might. Without sharks, the ecosystem can change -- in ways that can be bad for the bay and anyone living near it. Researchers studied how that might play out in Shark Bay, on the western tip of Australia.

Seagrass carpets about 1500 square miles of the bay floor. It acts as a buffer against storms, provides habitat for marine life, and filters the water. It also provides food for the “sea cows” known as dugongs.

Shark Bay also is home to lots of sharks -- especially tiger sharks. They spend the summer in the bay, then migrate elsewhere for winter. The dugong munch on the seagrass mainly when the sharks are away.

A major heat wave in 2011 killed off some of the seagrass. The main species grows slowly, so the beds take a long time to recover. A species of grass that’s more resistant to heat began filling in, but it’s not as helpful.

Scientists decided to check out what might happen if there were no sharks around, and the dugongs could feed on the good seagrass all year. The scientists removed some of the seagrass from the bay floor -- an imitation of conditions with year-round feeding. The good seagrass didn’t recover at all, while the replacement species did well.

So without the sharks to keep the dugong in check, the bay might not recover from its earlier trauma -- bad news for the bay and its residents -- including people.