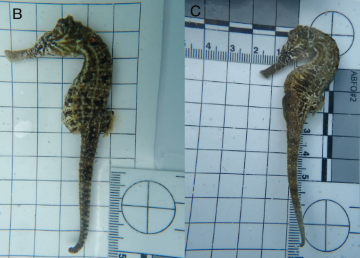 Sweetings Pond is its own watery universe. It’s on Eleuthera, an island in the Bahamas. The pond is about a mile and a half long and up to 45 feet deep. It’s separated from the ocean by a narrow strip of land. Seawater and microscopic organisms pass through pores in the limestone rock. Otherwise, the pond is isolated from the rest of the marine world. Even so, it’s home to an abundance of life—octopuses, brittle stars, clams, and other organisms.

The list includes seahorses. They’re far more concentrated than in most other seahorse habitats. In part, that’s because the bottom of the pond offers a good home—a lot of rocks, corals, oysters, and vegetation for the seahorses to cling to. And there’s not much fishing to bother their home grounds.

At first, biologists weren’t sure which species the seahorses belong to. But some recent research confirmed that they’re lined seahorses, named for white stripes on the head and neck. But they look a little different than other lined seahorses—their bodies are a little longer, for example.

Other research showed that there are more males than females, and the males are a good bit larger. It also found that the seahorses hang upside down during the day, then flip upright at night—but no one knows why.

The seahorses are listed as “vulnerable.” They don’t face an immediate threat. But climate change and other factors could make life more difficult for the seahorses in this unique marine universe.