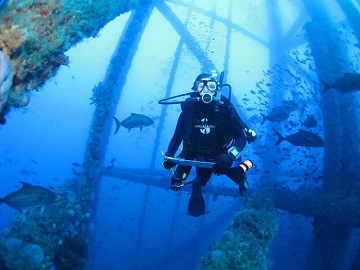 A diver swims among fish attracted to a retired oil rig that now serves as an artificial reef in the Gulf of Mexico. Credit: John Embesi, NOAA

Setting up an offshore oil rig takes a lot of time and money, and a lot of thought about the environment. And so does taking one down. California, for example, is pondering what to do with a couple of dozen platforms that have shut down or that are about to. And researchers have looked at what might happen to fish around those rigs.

Offshore platforms make good reefs. Mussels, oysters, and other shellfish latch on to the structure. Dead shells fall around the rig, providing good hiding places for small fish and other critters. That attracts larger fish.

Scientists looked at studies of fish populations around 24 rigs, mainly in Santa Barbara Channel, from 1998 to 2013. Several of the rigs are about ready for retirement.

The researchers looked at fish counts made by divers, robotic submarines, and commercial trawlers. They then estimated what might happen to those populations under three different scenarios.

In the first scenario, the entire platform would stay in place. And not surprisingly, that would have no impact on the fish in the area. In the second, the entire rig would be hauled away. In that case, the total amount of fish would drop by 95 percent. And in the final scenario, the rig would be chopped off 80 feet below the surface. That would chase away only about 10 percent of the fish.

No decisions have been made yet about how to handle the retired platforms -- busy habitats for fish off the California coast.