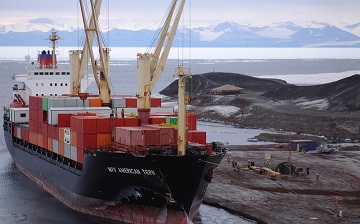 Lack of cruise ships and fewer cargo ships made for quieter seas in much of 2020. Credit: US Navy

For the humpback whales of Glacier Bay, Alaska, the early months of the COVID-19 outbreak may have been a blessing. Travel bans and cancelled cruises left the bay much quieter, especially during the summer tourist season. That meant the whales didn’t have to “talk” as loudly or simplify their messages as much as they do during normal summers.

In fact, for several months the oceans got much quieter. As economies closed down, the number of cargo ships went down, too. Scientists monitored what was going on -- both at the shipping noise and at how marine creatures responded.

Whales use sound to navigate, locate prey, and do much more. But noise created by people can overpower their calls. That could make it harder for whales and other creatures to get by.

The COVID cutbacks offer a chance to see just how dramatic the impact is. Scientists recorded noise levels and animal behavior during the outbreak. When the outbreak is over, they’ll compare the observations to those made both before and after the COVID days. They’ve also taken blood samples from whales, and will take more when conditions return to normal, to compare the amount of stress hormones the creatures produce under different noise levels.

Scientists have some early results. In Glacier Bay, human-generated noise was only half as intense in June of 2020 as in the previous year. And the whales spread out into regions of the bay they usually avoid -- waters calmed by a human pandemic.