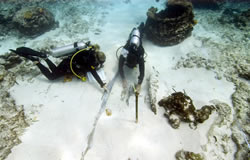 In April of 1822, the ships Pearl and Hermes were hunting whales far from the main islands of Hawaii when they found something bigger. They ran aground on an atoll -- a ring of coral reefs atop a dead undersea volcano. The sailors made it to one of the atoll’s tiny islands, where they lived for months before rescue. And today, the atoll is named for their ships.

Pearl and Hermes is near the northwestern tip of the Hawaiian Island chain, about 1300 miles from Honolulu. It’s part of the oldest section of the chain, which formed more than 20 million years ago.

The atoll covers about 450 square miles. The islands -- roughly a half-dozen of them -- cover just 80 acres. There are no trees on any of them -- just grasses and a few other scrubby plants. But the islands are nesting grounds for many birds, including several rare species, as well as monk seals and sea turtles.

And the waters of the atoll teem with life -- fish, shellfish, and many others. In fact, Pearl and Hermes has a higher concentration of marine life than any other part of the Northwestern Hawaiian Islands.

Today, the atoll is part of America’s biggest national monument. That protects its isolated life from human contact -- but not human problems. Plastic and other debris collects in the reefs. A few years ago, conservationists cleared out about 90 tons of junk.

Archaeologists have found several shipwrecks on the reef -- including those of Pearl and Hermes -- whaling ships that caught a big one.