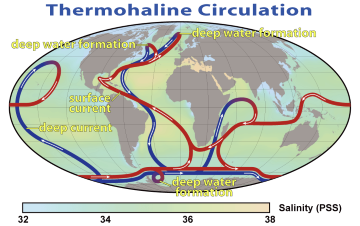 The Labrador Sea—a narrow body between Canada and Greenland—has been described as one of the “lungs” of the deep ocean. It absorbs oxygen from the atmosphere and deposits it deep below the surface. There, it enters a current that carries it into the North Atlantic Ocean, providing much of the oxygen that sustains life. And a recent study revealed new details about this process.

Researchers strung instruments along chains anchored to the bottom where the sea flows into the North Atlantic. The instruments recorded oxygen level, temperature, currents, and other details for two years, beginning in May of 2016.

The researchers paid special attention to measurements made at a depth of a couple of thousand feet. And they found a big jump in the amount of oxygen flowing out of the Labrador Sea during late spring and through the summer.

During winter, the top layer of the sea absorbs oxygen from the air. The surface water cools off, so it gets denser, sinking deep into the sea. The oxygen level in the deep water flowing out of the sea begins to go up around March.

As the oxygen-laden water exits, it mixes with a layer of deep water found throughout the North Atlantic. The Labrador water provides perhaps half or more of all the oxygen found in this layer. And some of the water travels into the South Atlantic and to the rest of the world’s oceans. That makes water from the Labrador Sea a vital resource for life in the North Atlantic—and beyond.