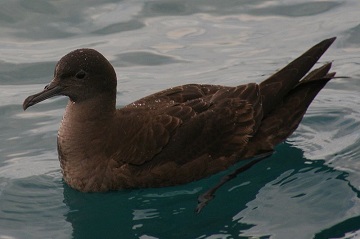 The plot of Alfred Hitchcock's The Birds, was based on a real event, when sooty shearwaters attacked a California town. Credit: Sabine's Sunbird, CC BY-SA 3.0

If you’re a fan of Alfred Hitchcock movies, this plot might sound familiar: Thousands of angry seabirds attack a town on the California coast. They ram into cars, houses, telephone poles, and everything else. The sound is deafening. Scared residents lock their doors and call for help.

If you’re thinking of “The Birds,” you’re right -- and wrong. That is the outline of Hitchcock’s 1963 classic. But it also was a real event.

It happened on August 18th, 1961, at Capitola, California, on Monterey Bay. The city was attacked by sooty shearwaters -- chocolate-colored birds about 18 inches long. They were migrating along the California coast. They terrified the city for hours. Then many of the survivors alit and cried like babies, witnesses reported.

Hitchcock was living a few miles away. He called the local newspaper for details. He worked them into his new movie. And he set the film at Bodega Bay, about a hundred miles up the coast.

It took several decades for scientists to discover the cause of the attack: bad shellfish. The birds had consumed shellfish that were loaded with a type of algae that produces domoic acid -- a powerful neurotoxin. In people, it can cause vomiting and diarrhea -- and even a permanent loss of short-term memory.

Outbreaks of the nasty algae have been more common in recent years. In 2015, the state closed a commercial crab fishery in northern California because of it. And the fishery has stayed closed since then -- not even fit for the birds.