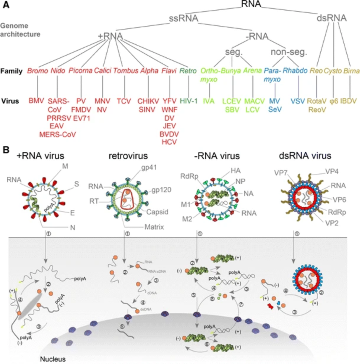 We’re all familiar with RNA viruses—or at least their effects. They cause colds, flu, measles, mumps—and COVID-19. So, you might not be thrilled to learn that scientists recently discovered 5500 new species of them in the world’s oceans. Many of them are so different from other species that the scientists have recommended adding some new branches to the virus “family tree.”

These viruses encode their genetic material not in DNA, as humans do, but in RNA—a material that’s similar to DNA but not quite the same.

Some RNA viruses kill cells and cause other problems. But most of them are harmless to people and other life. And some ocean viruses may be helpful—they may play a role in storing carbon dioxide that’s been pulled from the air in the deep ocean, for example.

The new study sifted through about 35,000 water samples collected from all the world’s oceans and most of its major seas by an international project. Researchers didn’t count the individual viruses, though. Instead, they looked for key markers of the viruses in small organisms found in the water. They then used machine learning to sift through the huge volume of data. That revealed the new species—some of which were seen in all the oceans.

Some of the species are pretty different from those in the five major “branches” of the RNA-virus family tree. So, the researchers have suggested adding five new ones—greatly expanding the diversity of these sometimes troublesome viruses.