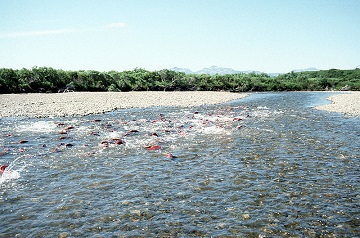 Spawning salmon in Alaska. Credit: US Fish and Wildlife Service

Keeping a close eye and a firm hand on fish stocks seems to keep them in pretty good shape. On the other hand, not keeping an eye on them, and letting fishing fleets do as they wish, doesn’t work out so well.

Lots of stories these days talk about how fish stocks are declining around the world. And in many cases, that’s certainly true. And it was true for many other cases until the last couple of decades.

But a study released in 2020 found that conditions in many regions have improved. Researchers studied a database of global fish stocks. The database covers about half of the world’s fish catch -- almost 900 groups of fish. The main gaps are in parts of Asia, Africa, and Central America.

The numbers showed that, in 1995, things were pretty grim the world over. Fishing was increasing and most stocks were declining. But new regulations began to turn things around. By 2005, the studied populations were getting healthier. And by 2016, the average fish stock was big enough to sustain commercial fishing operations.

The study found that fish stocks that were well monitored and managed generally did better than those that were left alone. Well-managed fisheries around the U.S. are among those that performed well, from the Pacific Northwest to the Atlantic Ocean.

Even with strong management, though, some stocks haven’t recovered as well as expected. So it will take more work to make sure that there are plenty of fish to go around in the decades ahead.