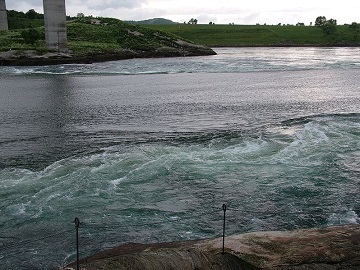 Every six hours or so, there’s a watery traffic jam in a narrow channel that connects two fjords in Norway. As the water piles up, it creates powerful currents and some impressive whirlpools.

Saltstraumen Maelstrom is one of the most powerful tidal currents in the world. It takes place in a channel that separates two bits of land. The channel is a couple of miles long, but only about 500 feet wide. And that’s why things get jammed up.

Forcing that much water into such a tiny channel is like putting your thumb over the opening of a garden hose. The water jets out with a powerful rush. In the case of Saltstraumen Maelstrom, the current can flow at almost 25 miles per hour. And there can be a difference of about three feet in the height of the water in the channel and in the fjords.

That much water moving that fast causes a lot of turbulence. That creates powerful currents, as well as big whirlpools. The whirlpools can be more than 30 feet across and 15 feet deep. Despite what you might think, though, the vortexes don’t swallow up boats. They can spin them around, fill them with water, and knock them over. But the whirlpools don’t pull boats to a watery doom.