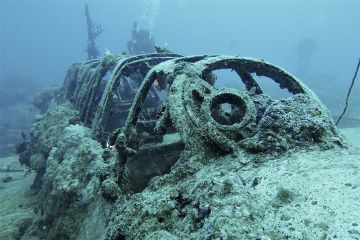 Many airplanes have been repurposed as artificial reefs to bolster both tourism and the local ecosystem. Credit: Motoki Kurabayashi, CC BY 4.0.

Many dead airliners spend the afterlife in the desert—in “boneyards” where they’re stripped for spare parts and scrap metal. But a few are ending up in wetter graveyards—as artificial reefs at the bottom of the sea. They provide an anchor for coral and oysters, which attract fish and other marine life. They also attract divers, boosting marine tourism.

People have made reefs out of everything from boats to piles of tires to subway cars. And crashed airplanes have made good reefs as well. But sinking an aircraft on purpose has become popular only in recent years.

One of the first was a Boeing 737 that was sunk a few miles off the coast of Miami in 1993. Named Spirit of Miami, it was ripped apart by a tropical storm two years later. But divers continue to visit it, about a hundred feet down. And it’s done its other job as well—it’s covered with corals and oysters, and big schools of fish hang tight.

A couple of airplanes have been sunk off the coast of Turkey. And another one took the plunge in the Gulf of Aqaba, near Jordan. Most of its interior is intact, so divers can swim through the cockpit, around the seats, and even into the restrooms.

The biggest sunken airliner is a Boeing 747 jumbo jet, which was committed to the deep in 2019. It’s the centerpiece of an underwater park that surrounds artificial islands in Bahrain. As with the other airliners, its fluids were drained and many of its parts were removed—making it safer for burial at sea.