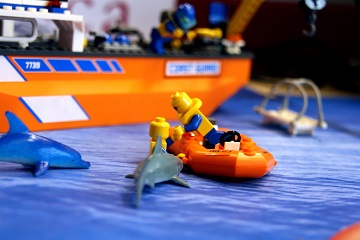 Legos are still being found on beaches from a spill 25 years ago. Credit: Scorpions and Centaur, CC BY-NC-SA 2.0.

Thousands of scuba tanks have washed ashore on the beaches of Cornwall, England, in the last quarter-century. So have life jackets, flippers, octopuses, and other nautical items. And they may continue to show up for decades longer. As you might expect, though, there’s a catch: They’re all Lego blocks that were washed off the deck of a ship.

The saga began in February 1997, when the cargo ship Tokio Express was hit by a rogue wave about 20 miles off Cornwall, at the southwestern tip of England.

Rogue waves can be several stories high, and they hit without warning. They may be generated when normal waves interact and amplify each other. In this case, the wave rocked the ship violently, splashing 62 cargo containers overboard. One of them was filled with Legos: almost five million in all. Collectors comb the beaches today in search of the blocks.

The early finds were lighter blocks that floated on the surface. Some of them found today are heavier. They may have scooted along the ocean floor until they washed ashore. And the finds aren’t limited to Cornwall. Bricks that might have come from the cache have been found as far away as Texas and Australia.

A study a few years ago found that it could take a thousand years or longer for some of the blocks to disappear. They disintegrate, forming smaller pieces that marine animals may eat—possibly killing them. And chemicals from the blocks could foul the oceans for a long time after that—thanks to a rogue wave.