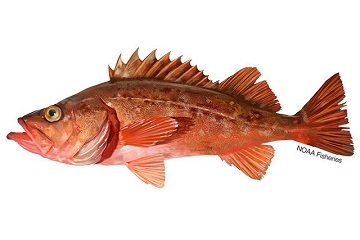 Researchers used microphones to find that bocaccio are loudest at dusk and dawn. Credit: NOAA

You can learn a lot about people by eavesdropping on their conversations: where they’ve been, where they’re going, what they’re thinking. And the same thing applies to fish. Listening to their conversations can reveal when they’re busiest, how they move around during the day and the year, when it’s mating season, and much more.

A recent study, for example, listened to a type of rockfish off the coast of California. Researchers studied bocaccio rockfish in the Channel Islands National Marine Sanctuary, near Los Angeles. Bocaccio are a popular commercial and sport fish. They weigh up to 20 pounds and are up to three feet long. They can live for 50 years. But they grow slowly, so if the population is reduced, it takes a long time to recover.

Microphones at depths of 65 to 500 feet “listen” to the soundscape in the islands all the time. Scientists study the audio to learn about many species, and to understand how marine life is affected by sounds created by people.

For the bocaccio study, researchers analyzed sounds during the fall of 2018 and spring of 2019. They found that the fish were louder at night, with peaks around dusk and dawn. There wasn’t much difference in sound between the seasons, though, indicating that the rockfish don’t “talk” more or less during mating season.

The researchers plan to expand their study to cover other times of year, and to plot hour-by-hour changes in the conversation -- learning more about an important species by eavesdropping.