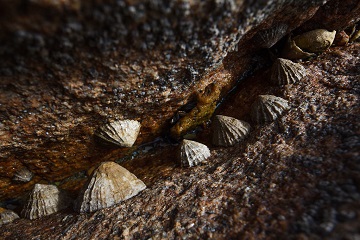 During the Irish potato famines of the 19th century, many people survived by eating limpets -- small animals that cling to rocks at the ocean’s edge. And when German troops occupied the island of Jersey during World War II, its people survived on a stew of limpets and curry powder. So limpets became known as “famine food” -- something to eat when there wasn’t much else.

Yet a recent study notes that limpets have been an important food source for thousands of years. In fact, the earliest record of humans eating limpets is a 164,000-year-old cave painting in Africa.

Limpets are marine snails. They’re found on rocky coastlines around the world. They look like little cone-shaped mountains, two or three inches across.

When the tide comes in, the limpet crawls along the rock, using several rows of teeth -- made of the strongest material found in any living organism -- to scrape algae off the surface. When the tide rolls out, the limpet follows its own trail back to its original spot. There, it seals itself to the rock so it doesn’t dry out.

By looking at the trash piles of prehistoric coastal villages, archaeologists have found that some villages consumed more limpets than any other shellfish. And limpets also were popular with the ancient Greeks, Romans, and other cultures.

Today, the limpet is ignored in some places and craved in others. And in some, it’s so popular that it’s almost completely vanished -- feast or famine for this tough little rock hugger.