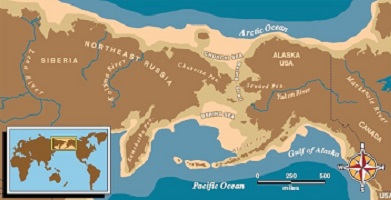 It’s hard to imagine that land around the top of the northern Pacific Ocean would have been more hospitable during the last ice age than it is today. But there’s evidence of just that. The conditions might have allowed people to begin the migration from Asia to the Americas. And a recent study suggested a possible reason for the milder weather: stronger currents in the North Pacific.

At the peak of the ice age, more than 20,000 years ago, much more water was frozen in glaciers. As a result, sea level in that region was hundreds of feet lower than it is today. That exposed the bottom of the Bering Sea, creating a “bridge” of land between Asia and North America.

Scientists have found evidence that the climate there was livable -- perhaps even warmer than the region is today. People from Asia may have lived there for thousands of years. They were cut off from the rest of the world by ice, so they settled in.

The new study looked at samples from the sediments at the bottom of the Pacific. The samples record conditions during the ice age. Researchers compared those conditions to models of ocean circulation.

They concluded that the region was warmed by the Pacific. A current in the ocean brought warm, salty water from the tropics. It acted much like present-day currents in the North Atlantic, which warm parts of Europe. That kept conditions fairly comfortable until the glaciers melted -- making it possible for the inhabitants to begin spreading across the Americas.