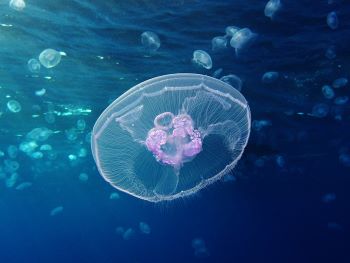 Every summer, millions of moon jellyfish invade small bays in Puget Sound, near Seattle. Called “smacks,” the groups can grow large enough to be visible from the air. And they appear to “smack” their lips—at least figuratively—at the tasty treats they find there. In fact, the jellyfish may be gobbling so many of them that they don’t leave many for young salmon or other fish.

A moon jellyfish consists of a transparent “bell” up to a foot or so across, with a pattern that looks like a four-leaf clover at its middle. Moon jellies have become much more common in Puget Sound in recent years thanks to warming waters. A marine heatwave known as “the Blob” led to a big jump in the number of jellyfish, and the numbers have stayed high.

Scientists have studied the impact of that jump over the last few years. In 2019, ’20, and ’21, they surveyed the waters in and around jellyfish smacks. They counted the number of jellyfish and gathered water samples. They compared the number of small organisms inside the jellyfish groups to the area outside. And they found that the population of copepods—shelled creatures that are a popular food for many marine organisms—were almost 75 percent lower inside the smacks. And the researchers reported similar results in tests in the lab.

That could be depriving other marine creatures of their treats—especially juvenile salmon, herring, and other fish. So, the invasions of moon jellies could be changing the ecosystem in Puget Sound.