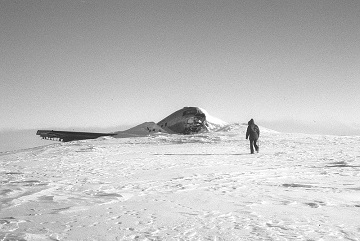 Most islands don’t move around much. But for more than two decades, scientists and others operated from one that did. Known as T-3, the kidney-shaped island was seven miles long. It drifted close to the north pole. And eventually, it melted away. That’s because the island was made of ice -- it was a giant iceberg.

T-3 was discovered after World War II, when the military was sending airplanes across the Arctic Ocean to keep an eye on the Soviet Union. In 1952, the Pentagon built a station on the island to record the weather.

Over the next couple of decades, several more ice islands were used as floating outposts as well. But T-3 was the busiest. Bases there came and went. But the last one didn’t shut down until 1974.

Scientists used T-3 and the other ice islands to study the Arctic. They collected organisms from the water. They used sonar and other techniques to map the bottom of the ocean. And they plotted the layers of water within the ocean. And scientists are still using those results. A study in 2019, for example, analyzed readings of the temperature of the ocean floor.

The T-3 researchers also plotted ocean currents. T-3 drifted thousands of miles in the Beaufort Gyre, a current that loops around northern Alaska, Canada, and Greenland, and up to the north pole. In the early 1980s, though, T-3 was carried into the northern Atlantic, where it melted -- ending the travels of this mobile island.