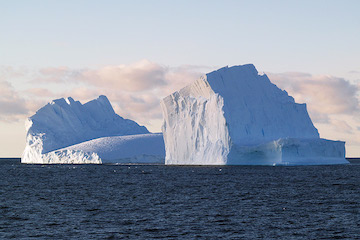 Icebergs once drifted in the ocean near the Florida Keys. Credit: Patrick Rowe, NSF

If you’re lounging in the Florida Keys one day and you see an iceberg drifting by, you might think you’ve had one too many margaritas. But a recent study says giant icebergs did make it to the Keys thousands of years ago -- the result of massive flooding thousands of miles away.

Researchers examined scour marks in the ocean floor off the coast of the southeastern United States. The marks are V-shaped grooves in the sediments, carved by icebergs scraping along the bottom. Based on the depth of the grooves, some of the icebergs must have been at least a thousand feet tall.

The researchers also took samples of the sediments from a few of the grooves. That allowed them to determine when the icebergs drifted by -- about 31,000 years ago.

These weren’t just routine icebergs, though. They were moving against the Gulf Stream -- a strong, warm current that flows northward off the American coast. So the researchers created a mathematical model to understand what happened.

Their work showed that the icebergs probably were pushed southward by a massive flood in Hudson Bay, in northern Canada. An ice dam that was holding back a melting glacier burst, disgorging billions of tons of freshwater. There was so much water, and it was moving so fast, that it powered through the Gulf Stream. It might even have made the Gulf Stream cooler and weaker, which could have made the climate in Europe colder for a bit -- all while propelling icebergs all the way to the Florida Keys.