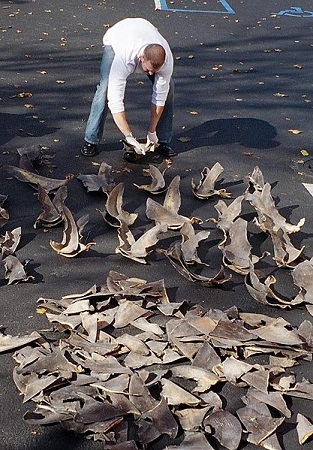 It’s illegal to own any piece of a marine mammal, such as a walrus tusk, for example. It’s also illegal to own any part of a sea turtle, including jewelry made from the turtle shells. The only exceptions are for pieces gathered before the laws went into effect, or for some native crafts.

In some states, it’s illegal to possess a shark fin. Shark-fin soup is a delicacy in some cultures, but many sharks are endangered. It’s also illegal to own the organs of puffer fish and others that produce tetrodotoxin -- a powerful neurotoxin. Several people have been convicted of using it to commit murder or attempted murder.

It can even be illegal to own products that marine organisms don’t want. Here in the United States, that includes ambergris -- a substance that’s used in other parts of the world in medicines, spices, and perfumes. It’s a rock-like material produced by sperm whales. It develops around squid beaks that pass through a whale’s digestive system, protecting the whale from injury. The whale excretes lumps of the stuff, which wash up on the beach. It’s legal to own or sell in many other countries and can fetch high prices. In the U.S., though, it’s like anything else from a marine mammal: Hands off!