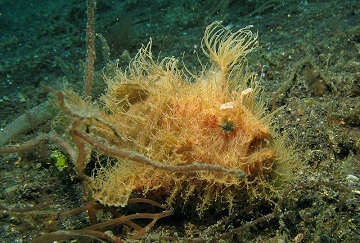 The striated frogfish has quite a resumé. It walks on the ocean floor, camouflages itself to avoid predators, carries its own fishing lure, and can gobble another fish faster than the blink of an eye. And it has a shaggy appearance that’s earned it a nickname: the hairy frogfish.

The fish is short and round -- only about eight or nine inches long. It lives in fairly warm, shallow waters around the world. In the United States, it’s found along the Atlantic coast from New Jersey southward, in the Gulf of Mexico, and in Hawaii.

The hairy frogfish’s most obvious feature is its “mane” of structures called spinules. They’re long and thin, and they cover its entire body, so they make it look shaggy.

The fish doesn’t really swim. Instead, it uses the short fins on the bottom of its body to walk across the ocean floor.

A fin on the top of its body looks like a wiggly worm, so it lures in other fish. When a fish gets close enough, the frogfish inhales it in a single gulp that takes less than a thousandth of a second. And it can unhinge its jaws to pull in fish that are almost as big as itself -- including other frogfish.

Frogfish have several ways to protect themselves from predators. They can puff up, getting too big to swallow. They can also change colors and patterns to blend into their surroundings. And they can mimic creatures that predators try to avoid, such as sea urchins. All of these strategies help protect this “shaggy” resident of the ocean floor.