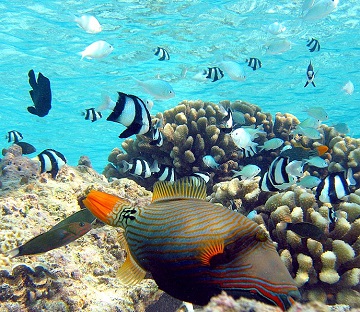 Marine biology combines old and new, stinky and sterile -- often in a single project. In 2016, for example, researchers gathered fish from a coral reef in the Pacific Ocean. They cut the fish open to see what they’d eaten, then used the latest technology to analyze the DNA of what they found.

The study was designed to help us learn how changes in coral reefs caused by people are changing the balance of life on the reefs. The loss of a few species can ripple along the food chain, causing big changes on the entire reef.

Researchers gathered 22 species from a reef at an island near Tahiti. They opened the fish up and collected the contents of their digestive systems. Finally, they analyzed the DNA of those last meals to learn what the fish had eaten. Since the gut contents degrade in a hurry, DNA is the only way to sort out what’s there.

Other researchers had already compiled a catalog of the DNA of life on the reef. That made it easier to identify the organisms found in the study group.

The analysis showed that the fish had consumed more than 4,000 different prey organisms. Different species tended to eat different things -- although one gluttonous fish had consumed about three-quarters of all the species found in the study. And even closely related species had followed different diets.

The researchers said that combining DNA with other techniques should make it even easier to figure out what reef species are eating -- helping track changes in life on coral reefs.