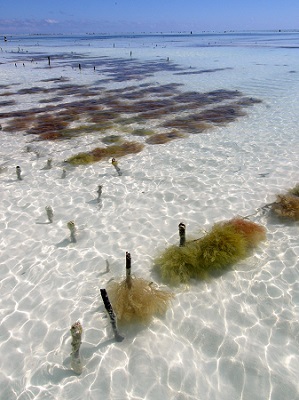 A recent study says that seaweed grown in farms could be a twofer: It could reduce the pollution in estuaries while producing nutritious food.

The study was conducted by researchers in the United States and Israel. They developed a model of how large-scale seaweed farms located in estuaries might impact the environment.The model also looked at what economic benefits the farms might yield.

The model simulated different lighting conditions, temperatures, and nutrients to evaluate how the farms would perform in different seasons. The model was checked against a small experiment in which a type of seaweed was grown in an estuary.

The scientists were especially concerned about nitrogen. It’s a key ingredient in fertilizers. When it washes into the oceans, though, it can cause environmental damage, such as red tides and “dead zones” where there’s little or no oxygen in the water.

The model showed that the seaweed was efficient at removing nitrogen from water in an estuary. It could even remove nitrogen from already polluted estuaries, helping to clean them up.

At the same time, the seaweed contains healthy proteins and starches, so it could be sold as food for people or animals. So cleaning up coastal waters also could be an economic engine -- a “twofer” for seaweed farming.