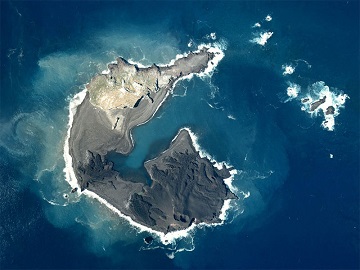 Nishino-shima in 1978 aerial photo. The upper part of the bay is the old island, and the lower part is the new island formed by the 1973 eruption. Credit: National Land Image Information (Color Aerial Photographs), Ministry of Land, Infrastructure, Transport and Tourism, Japan.

A volcanic island in the western Pacific Ocean just can’t settle down. After not changing much for thousands of years, it’s undergone a series of eruptions in recent decades. That’s made it much bigger. And the eruptions may not be done.

Nishino-shima is about 600 miles south-southeast of Tokyo. It’s the tip of a volcano that rises two miles from the ocean floor.

Before 1973, the island was only a couple of thousand feet wide, and its volcanic cone rose only a few dozen feet above the waves. And the volcano probably hadn’t erupted in 10,000 years. In May 1973, though, it roared to life. It created a small second island. As the eruption continued, the islands merged.

Another big eruption came along in 2013. It also formed a new island. But lava quickly paved over the whole complex. The merged island covered a square mile, and its volcanic cone towered 450 feet above it.

Other eruptions followed, with another big one starting in 2020. This one was more violent than the previous ones. Columns of steam and ash rose five miles into the air. Big blocks of rock, known as “bombs,” were blasted up to a mile away. And flowing lava expanded the island even more. By August, it had grown to 1.6 square miles, with the volcano rising higher than ever.

The style of this eruption suggests it could go on for a while -- keeping Nishino-shima from settling down.