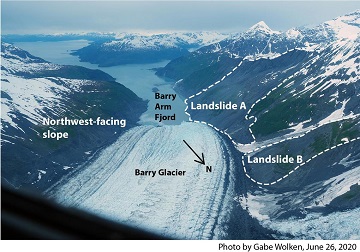 Melting glaciers are a big problem. As their water pours into the oceans, it raises the global sea level -- a problem that will get worse in the years ahead. But they could trigger more immediate problems for people who live near them: tsunamis.

As our planet warms up, glaciers are getting thinner. And they’re backing away from the coastline, exposing land that might have been covered up for millennia. Such land might be unstable, so it could create a massive landslide. As the rocks and dirt slam into the ocean, they could generate a tsunami that would ripple along the coastline and beyond.

Researchers studied that possibility in Prince William Sound in southeastern Alaska. It’s best known as the site of the Exxon Valdez oil spill, in 1989. Today, it’s ringed by several small towns. In non-COVID times, it’s a popular spot for cruise ships and other visitors.

A glacier on an inlet known as Barry Arm Fjord has been trickling away for decades. Researchers used satellites to track its retreat, and computer models to simulate what might happen in the years ahead.

They found that the exposed slope at the edge of the glacier has slipped by about 400 feet in the last few years. And an earthquake or other big event could cause it to plunge into the sound in seconds -- generating a tsunami. It could overwhelm the settlements on the sound. And it could churn up oil at the bottom of the sound left over from the Exxon Valdez -- just one more possible problem from melting glaciers.