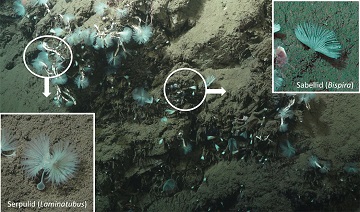 Some small worms may be doing the world a big favor. They’re gobbling up bacteria that eat methane, a gas that contributes to global warming.

Biologists discovered the worms during research cruises in 2017 and ’18. The scientists were studying the ocean floor off the Pacific coast of Costa Rica. In particular, they were using a small robotic submarine to scan the area around methane seeps -- spots where methane is bubbling up into the water from underground pockets.

At a seep more than a mile down, they found two new species of worms. They’re a couple of inches long, and they have appendages that look like fans or feather dusters. They’re related to similar worms found in all the world’s oceans.

These new species were different from all the other ones in one important way: They appear to survive by eating bacteria that live by consuming methane from the water. The fan-like structures on the worms were covered with the bacteria.

The worms have normal digestive systems, but they didn’t appear to be using them. Instead, studies revealed that the worms had high levels of methane inside them. That suggests that the worms absorb the methane-eating bacteria through their skin.

No one has looked to see if similar worms are consuming similar bacteria. But if they are, then the worms could be trapping a lot of methane, preventing it from bubbling up into the atmosphere. And that could help slow down the rate of global climate change by just a little -- a big favor for all of us.