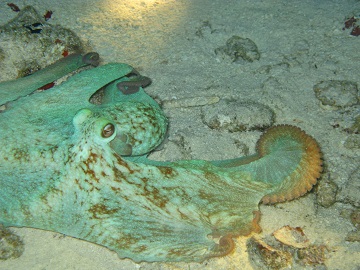 Octopuses have eight arms, each of which can move in any direction at any point on the arm. Credit: Heather A. Herrick

If your arms and legs are a little stiff when you get out of bed in the morning, you might be envious of the octopus. It has some of the most flexible appendages yet studied. Its eight arms can move in several ways, in any direction, and at any point on the arm.

The arms make up more than half of the octopus’s body weight. That’s because an octopus relies on them for just about everything it does: moving through the ocean, finding and catching prey, fighting, mating, and camouflaging itself from predators. Special receptors on the arms act like noses and tongues -- they “sniff” odors in the water and “taste” the objects they touch to see if they’re yummy treats or something to avoid.

All of that activity requires the octopus to stick its arms in some small, twisting spaces -- holes in the ocean floor or small openings in rocks or reefs. That’s one reason the arms need to be so flexible.

To find out how flexible, researchers spent months recording 10 octopuses in the lab. When they analyzed the video, they noted more than 16,000 specific motions. From that, they determined that all the arms could bend, twist, or get longer or shorter. They could bend up or down or side to side, and twist all the way around. And all of those motions could take place at any spot on any arm.

The researchers noted that scientists have long talked about the flexibility of octopus arms. But this was the first study to confirm that octopuses don’t have to worry about stiff joints in the morning.