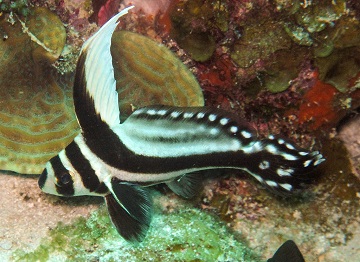 Fish make a lot of noise. They grunt, click, pop, squeak, groan, buzz, and make many other sounds. And they’ve probably been talking for a long time.

Scientists have long known that some fish make sounds. In fact, some fish are named for their sounds: drums ... grunts ... and croakers ... among others. Like land animals, they use sound to attract mates, avoid predators, find prey, and defend their territory.

As scientists have studied the ocean soundscape in more detail, they’ve discovered that fish sounds are quite common. A recent study by researchers at Cornell, for example, concluded that most fish use some sort of sound.

The researchers looked at recordings of fish, along with previous studies of fish sounds. They also looked at how fish are put together -- many fish have structures that produce sounds. Muscles around the swim bladder, for example, squeeze the bladder, producing grunts and croaks. And certain bones rub against each other, making clicks and other sounds.

The researchers concluded that fish first began producing sounds at least 155 million years ago. And different families of fish independently evolved the ability to make sound at least 33 different times. Additional research could reveal sound capabilities going even farther back in time, involving even more fish -- showing that fish have been talking to each other for a long, long time.