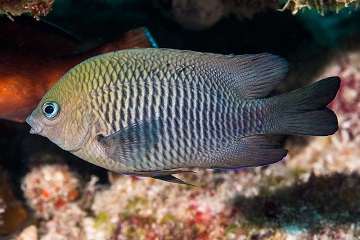 Damselfish are feisty protectors of their algae "farms" and the shrimp who help fertilize the algae. Credit: zsispeo, CC BY-NC-SA 2.0

The longfin damselfish is a feisty little farmer. It’s only a few inches long, but it will attack just about anything that enters its territory -- including people. Yet some damselfish in the Caribbean actually protect a tiny shrimp on their farms. That’s because the shrimps’ waste helps fertilize the farm -- which may make the damselfish stronger.

The “farms” are patches of algae that the longfin damselfish protect. Scientists had noted that some of the farms contain dense blobs of mysid shrimp. The tiny crustaceans would seem to be a good food source for the damselfish. Instead, though, the fish leave the shrimp alone.

To find out what was going on, marine biologists studied one such farm, off the coast of Belize. They found that the damselfish had “domesticated” the shrimp -- just as people have domesticated dogs. The shrimp provide a service, while the damselfish keep the shrimp safe. It’s the first example of such a relationship seen in the ocean.

Regardless of the cause, though, it seems clear that this fish-and-shrimp combo has a good thing going.