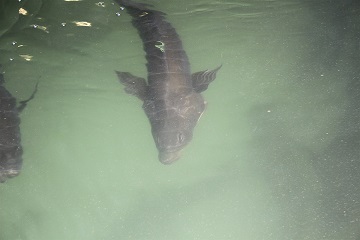 Totoaba swim bladders are in high demand, depsite the fish being endangered and illegal to catch. Credit: public domain

One of the most expensive commodities on Earth is the swim bladder of a large fish found in the Gulf of California. It’s a delicacy in China, where it’s thought to heal arthritis and other ailments. A single bladder can fetch thousands of dollars. Don’t try finding one, though. The fish is endangered, so it’s illegal to catch, sell, or even have one.

The totoaba is in the family of drums and croakers. In fact, it’s the largest of all drum species. An adult can be six feet long and weigh more than 200 pounds.

They spawn at the mouth of the Colorado River, at the northern end of the Gulf of California, between Baja California and the Mexican mainland. The juveniles stay there for a couple of years, then move to deeper waters in the gulf.

Totoaba were overfished in the 1940s and ’50s. And dams along the Colorado River cut the amount of freshwater flowing into the river delta. The combination caused the population to collapse. Mexico banned fishing for the species in 1975. Yet the value of the swim bladder, which lets the fish control its depth, inspires illegal fishing.

Scientists aren’t sure how big the totoaba population is, but they’re trying to find out. One way is by listening for the calls the fish make -- a combination of croaks, knocks, and other sounds. Scientists also have used instrumented tags to track fish in the gulf to see where they go and what they do.

Those efforts are important steps in managing the future of this expensive endangered fish.