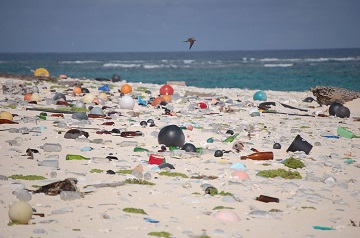 Plastics are a growing problem in the oceans. Credit: USFWS Headquarters, CC BY 2.0

The world’s oceans just keep getting more polluted. That’s not good for anything living in them or near them -- including people. In fact, ocean pollution may cause millions of premature deaths every year.

A recent study looked at hundreds of smaller studies done over the last few years. It put them together to provide a look at conditions around the globe. It found that pollution is widely spread, and it’s getting worse.

It’s made worse by increased manufacturing, bigger farming operations, and bigger coastal populations, among other causes. All of them generate wastes that find their way into the oceans.

Mercury is more common in the oceans than ever, for example. It comes mainly from coal-fired power plants. Mercury accumulates in fish and shellfish, which people eat. It can harm the brains of unborn children, and increase the risk of cancer and heart problems in adults.

Fertilizers, raw sewage, and other runoff lead to more and longer harmful algal blooms. Some of the algae produce toxins that can be deadly. So when they show up, fishing areas and beaches have to shut down.

Plastics are a growing problem as well. About 10 million tons wash into the oceans every year. As they break down, their chemicals can enter the food chain. Many of the chemicals are toxic, so they can cause health problems for marine organisms and the people who eat them.

The report says it’ll take a lot of work to clean up the oceans -- making them safer for life everywhere.