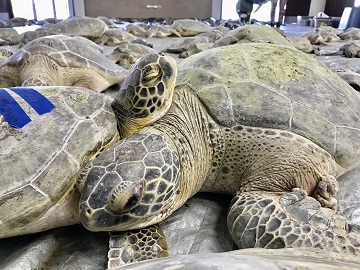 The South Padre Island Convention Centre has hosted conferences, plays, concerts, and even basketball games. In February, though, it hosted an event like no other: a sea turtle rescue.

A major winter storm chilled waters along the Texas coast. Sea turtles were stunned by water temperatures that plunged into the 40s and even 30s. Volunteers gathered about 13,000 turtles from the beaches and took them to rescue centers all along the coast, including the University of Texas Marine Science Institute. The facilities were overwhelmed, so they needed backup -- including the convention center, plus a naval air station in Corpus Christi.

The storm drew national headlines for its effects on the human population -- lost power and water, dangerous roads, and high energy costs. But it took a toll on other life as well.

Fish were killed all along the coast, especially the southern half. Official estimates said that almost four million fish were lost. Most of those were non-game fish, including a million hardhead catfish and more than a million silver perch. Major game-fish losses included spotted seatrout and red and black drum. Texas changed some regulations to help some of those species, but it could take years for them to recover.

The sea turtles -- mostly green turtles -- fared a little better. Rescue organizations thawed them out and released them in warmer, deeper waters in the Gulf of Mexico. Even so, thousands of turtles died -- victims of a massive winter storm.