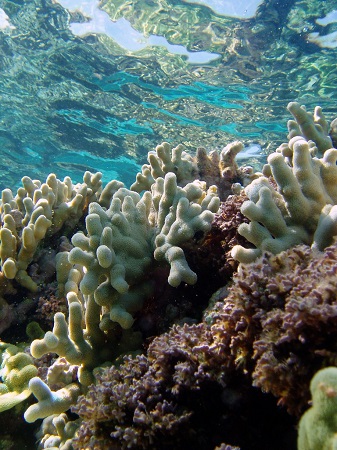 Corals are in trouble. Higher ocean temperatures and acidity are damaging or killing many reefs. And the problem gets worse by the year. But not all the news is in the “doom-and-gloom” category. Several recent studies have provided a slightly more hopeful outlook.

Corals survive with the help of algae that live inside them. The algae are photosynthetic—they convert light and carbon dioxide to sugars, providing most of the coral’s nutrients. When conditions get bad, though, the algae are kicked out—a process known as coral bleaching. And without the algae, the coral dies.

But one study found that, among some common coral species in Hawaii, the problem is less severe. The study looked at how three species might get along under projected conditions. In two of the species, more than half survived. And in one of them, the survival rate was more than 70 percent.

Another study looked at three coral species in Mexico. It found that survival rates depended not just on the coral and algae, but on the many other microscopic organisms that lived with them. The corals that best survived had a larger group of these organisms.

And a third study found that there might be a way to “jump start” corals after they’ve been bleached. Researchers created a type of algae that can provide food for the corals without photosynthesis—a “short cut” to restored health.

So some corals might do okay in the future, while others could be helped along—keeping them alive under challenging conditions.