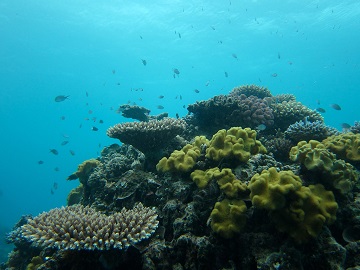 A healthy coral reef is a noisy coral reef. Shrimp, fish, and other organisms create a cacophony of sound that attracts other critters. And for damaged reefs that’ve been restored, the noise can reappear in just a year or two.

Researchers from England studied reefs around several islands in Indonesia. Many of the reefs have been damaged or destroyed by “blast fishing,” climate change, and other causes.

But a big project has been trying to nurse some of the damaged reefs back to health. Metal frames that are “seeded” with coral stabilize the seabed and allow the reefs to start regrowing.

The researchers dropped microphones into the water in 2018 and ’19. They listened to reefs that had stayed healthy, some that had been restored within the previous one to three years, and some that were still damaged. And at both the healthy and restored reefs, they recorded an impressive array of sounds: grunts, whoops, purrs, and even one they described as a “raspberry.” But the damaged reefs were much quieter.

There were some differences between the sounds on the healthy reefs and the restored ones. But even reefs in the early stages of restoration were just about as loud as the ones that had stayed healthy, and they had just about as many different sounds. So one way to evaluate the health of a coral reef -- and the effectiveness of restoration efforts -- is to listen in.