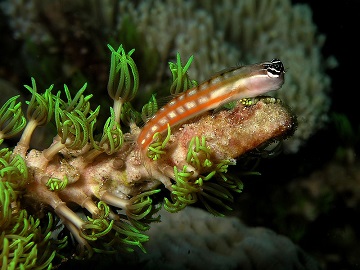 Many blennies have stripes running through their eyes. Credit: Nick Hobgood, CC BY-SA 3.0

Fish display an amazing array of colors. Some are blacker than charcoal, others have rainbow-colored stripes, and still others have a mottled appearance to help them blend into the background. And the variety extends to fish eyes. They can feature colorful specks, dark stripes, and irises from red to green. Some even shine in the dark.

The eyes of most fish are pretty dull -- a black pupil surrounded by a white iris. But there are times when a different color scheme can be helpful. It might confuse predators, for example. They wouldn’t know which direction a potential prey was heading, so the prey might have an extra instant to escape. Or the color might help a fish blend into the bottom, making it easier to catch a meal.

Some fish have stripes along the head or body that continue across the eye. That includes some blennies -- a red stripe from head to tail extends through both the iris and the pupil.

Other fish have spots of color in their eyes. The striped mullet, for example, has a bright yellow splotch in its iris, while specks of blue-green decorate the pupils of the balloonfish.

And still other fish have colorful irises. They’re usually in shades of yellow, orange, or red. The eyes of the striped burrfish, though, are bright green. So are the eyes of the greeneye. Its eyes look green even when the little fish is thousands of feet deep. That’s because the eyes produce their own light -- helping the greeneye keep a sharp eye on the ocean depths.