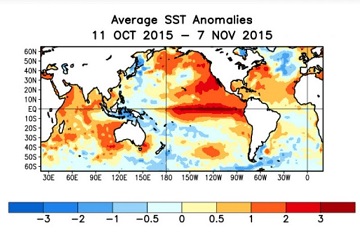 The last El Niño was a whopper. It produced a monster storm season in the North Pacific, extreme drought in the Caribbean and parts of Africa, and a jump in global temperatures. And it kept the southern United States cool and wet.

Recent studies, though, suggest the cycle could be speeding up. If climate change continues at its present rate, big El Niños and La Niñas could happen twice as often -- roughly every decade.

El Niño and La Niña are part of a cycle known as ENSO -- the El Niño Southern Oscillation. Changes in water temperature in the west-central Pacific Ocean are accompanied by shifts in winds and ocean currents. During El Niño, warmer water moves toward the coast of South America. And during La Niña, those waters get cooler. The change can affect the climate of much of the planet.

El Niño and La Niña alternate every few years. Most events are mild. But some are quite strong. And some climate models suggest that the more powerful bouts could become stronger and more frequent. In fact, there’s evidence that it’s already happening.

So far, though, scientists have good records for only the last few decades. That makes it hard to know if the changes are caused by climate change, natural cycles in the Pacific, or a combination. Scientists are keeping a close eye on the Pacific to find out.