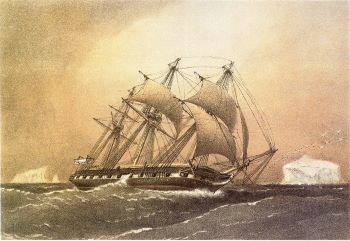 HMS Challenger set sail from England to study the world’s oceans on December 7th, 1872. Its accomplishments were so massive that it took 23 years and 30,000 pages to publish them all. Yet the job isn’t finished even now. Scientists look at its results to teach us how the oceans have changed in the 150 years since it headed out to sea.

The expedition was organized by Britain’s Royal Society. A few small expeditions had probed some of the ocean. But the Challenger expedition was by far the most ambitious to date—it was designed to study the oceans around the entire world. It’s considered the beginning of modern oceanographic exploration.

Challenger was a Royal Navy sailing vessel outfitted for science. Most of its guns were taken out, and labs were set up below decks for its half-dozen scientists.

The expedition crossed all the major oceans except the Indian. The scientists measured currents, water temperatures, and ocean depths, and discovered the deepest feature of all—the Challenger Deep. They dredged sediments from the bottom, and cataloged 4700 previously unknown species of marine life.

Challenger logged almost 80,000 miles before returning to England, in 1876. Experts then began studying its records and samples, which are still available today. In fact, they’re helping scientists understand our changing climate and its impact on the deep ocean—one more “challenge” for this pioneering expedition.