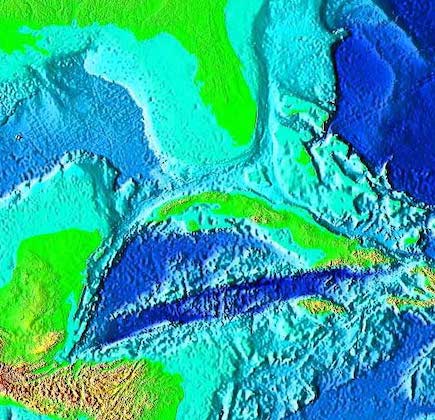 The Cayman Trench is about a thousand miles long and 60 miles wide. Photo Credit: NOAA

The Caribbean Sea is known for its tourist-attracting wonders: sandy beaches, coral reefs, and beautiful blue-green waters. But the deepest part of the sea is full of geological wonders. Parts of Earth’s crust there are moving apart. That’s created a long, deep trench, along with metallic “chimneys” that belch dark, super-heated water.

This busy region is known as the Cayman Trench or Cayman Trough. It’s about a thousand miles long and 60 miles wide. It stretches from the southeastern end of Cuba to near the “notch” at the base of the Yucatan Peninsula. It bottoms out at almost five miles -- the deepest part of the entire Caribbean Sea.

The trench is like a neutral zone between two competing slabs of Earth’s crust. The North American Plate is to the north of the trench, with the Caribbean Plate to the south. The two plates are pulling apart from each other. They’re also sliding sideways. Tall ridges on their margins form the “walls” of the trench.

In 2010, researchers discovered a patch of “black smokers” more than three miles down -- some of the deepest ever found. These tall chimneys belch water that’s been heated to 800 degrees by molten rock far below the sea bed. The water carries a lot of dissolved minerals, including iron and copper, which have piled up to form the chimneys.

Researchers also have discovered several new species of life around these vents, including shrimp, tube worms, and other creatures -- busy colonies of life at the bottom of the Caribbean Sea.