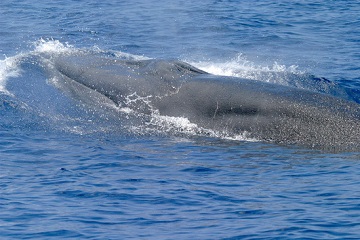 Bryde's whales are one of the most endangered groups of whales in the world. Credit: NOAA

One of the most endangered groups of whales in the world hangs out in the northeastern corner of the Gulf of Mexico. It’s down to fewer than a hundred members. And although it’s protected as an endangered species, challenges in the Gulf could make it hard for the whale to recover.

The Gulf of Mexico Bryde’s whale stretches about 40 feet long and weighs about 30 tons. It’s most often seen off the Florida Panhandle, near a small gash in the ocean floor known as DeSoto Canyon. It’s usually seen alone or in pairs, and generally stays at depths of a couple of hundred to more than a thousand feet. It uses a comb-like structure known as baleen to filter tiny organisms from the water, probably near the bottom.

It’s related to other Bryde’s whales, which are found in fairly large numbers around the world. They’re named for Johan Bryde, a Norwegian who established the first whaling station in South Africa.

The Gulf Bryde’s whale was declared an endangered species in 2019. Biologists estimate the group lost about 17 percent of its members as a result of the Deepwater Horizon oil spill, which fouled half of its range.

Future spills are among the many challenges facing the whales. So are habitat destruction, water pollution, and collisions with boats. And propellers, sonar, and other human-generated noise can scramble a whale’s internal navigation, causing strandings and other problems. So the whale faces a difficult future in its little corner of the Gulf of Mexico.