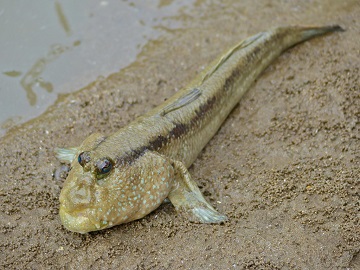 Some fish, like the mudskipper, are able to breathe air and survive on land for short periods of time. Credit: berniedup, CC BY-SA 2.0

For most fish, there’s one way to breathe. The fish takes in water through its mouth and passes it over its gills. Tiny blood vessels in the gills absorb oxygen from the water and send it through the fish’s body. If the fish leaves the water for more than a few minutes, it suffocates -- it can’t breathe oxygen from the air.

But a well-known sport fish can take big gulps of air. And several other species of fish can survive on land for hours.

The mudskipper, for example, is one of several amphibious fish. It’s found in shallow coastal waters across the Indian Ocean. It uses its fins to walk or jump across land in search of prey. In fact, it can spend most of its life on land. It absorbs oxygen through its gills and its skin, and through special linings in its neck and throat.

The sport fish is the tarpon -- a silvery fish that can be eight feet long and weigh almost 300 pounds. It has gills, but it’s also set up to breathe air.

Like most fish, the tarpon has a swim bladder -- an organ that helps the fish control its depth. But the swim bladder on the tarpon is a little different. It has four rows of structures that connect to the mouth, allowing them to take in the air directly. The linings of these structures act a bit like a lung, extracting oxygen from the air. It’s especially helpful when the fish is in a place where there’s not much oxygen in the water, such as backwater areas. There, the fish just rises to the surface and takes a big breath of fresh air.