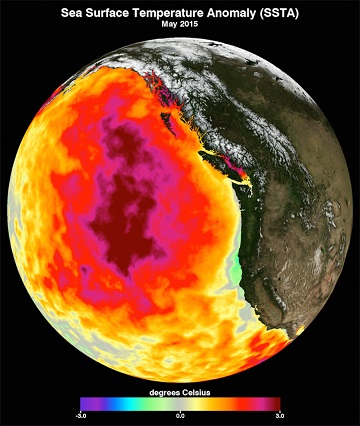 This image shows the monthly average sea surface temperature for May 2015. Between 2013 and 2016, a marine heatwave known as the Blob dominated the North Pacific, indicated here by red, pink, and yellow colors signifying temperatures as much as five degrees Fahrenheit higher than average. Credit: NASA

In the 1958 B-movie “The Blob,” Steve McQueen and the gang stop the blobby monster from absorbing people by freezing it. The Air Force then drops it on Arctic sea ice to keep it frozen. With the sea ice melting in a hurry, though, perhaps we should keep an eye out to make sure it doesn’t head back for land.

On the other hand, the warming climate has already given us an ocean “blob”: a giant pool of warm water off the Pacific coast. It killed huge numbers of marine organisms.

This blob was the result of a marine heatwave. Like a heatwave in the atmosphere, it’s marked by a big jump in temperature. And it can last for anywhere from days to years.

The Blob, for example, began in late 2013, and lasted into 2016. At its peak, it formed three giant patches. They stretched more than 2,000 miles along the coastline, from the Bering Sea to Baja California. Water temperatures reached about four and a half degrees higher than normal.

The heatwave was fed by high pressure in the atmosphere. It kept skies clear and sunny, warming the ocean surface. It also held down winds and blocked storms. Without the winds, the warm surface water couldn’t mix with the colder deep water, so the top few hundred feet of the ocean warmed up.

Without the mixing in the ocean layers, there were fewer nutrients to feed the tiny organisms that form the first link in the food chain. The effect rippled through the ecosystem. Fish, birds, and mammals died off in huge numbers -- victims of the Blob.